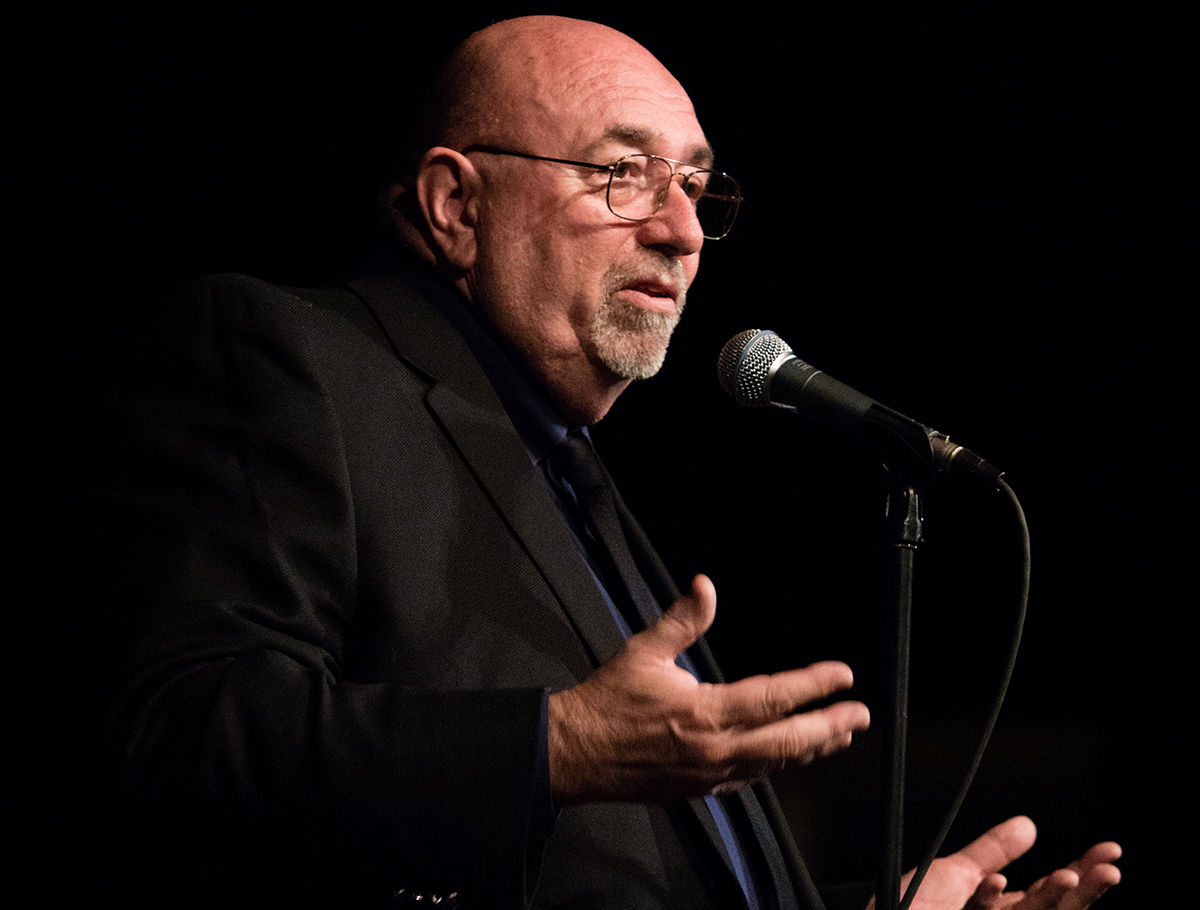 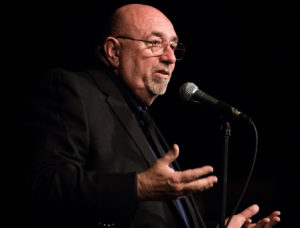 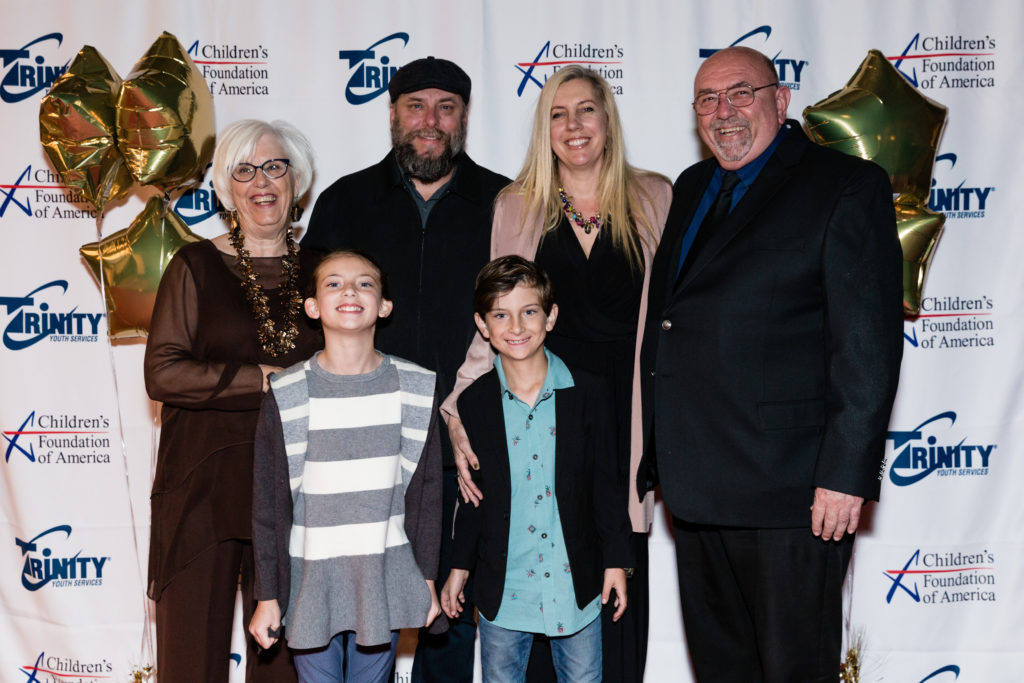 In January, Trinity Youth Services staff and partners presented a retirement party for John Neiuber at the historic Fox Theater Pomona. Guests arrived to a red carpet under a marquee with title, “Dial R for Retirement,” celebrating our star of the show. 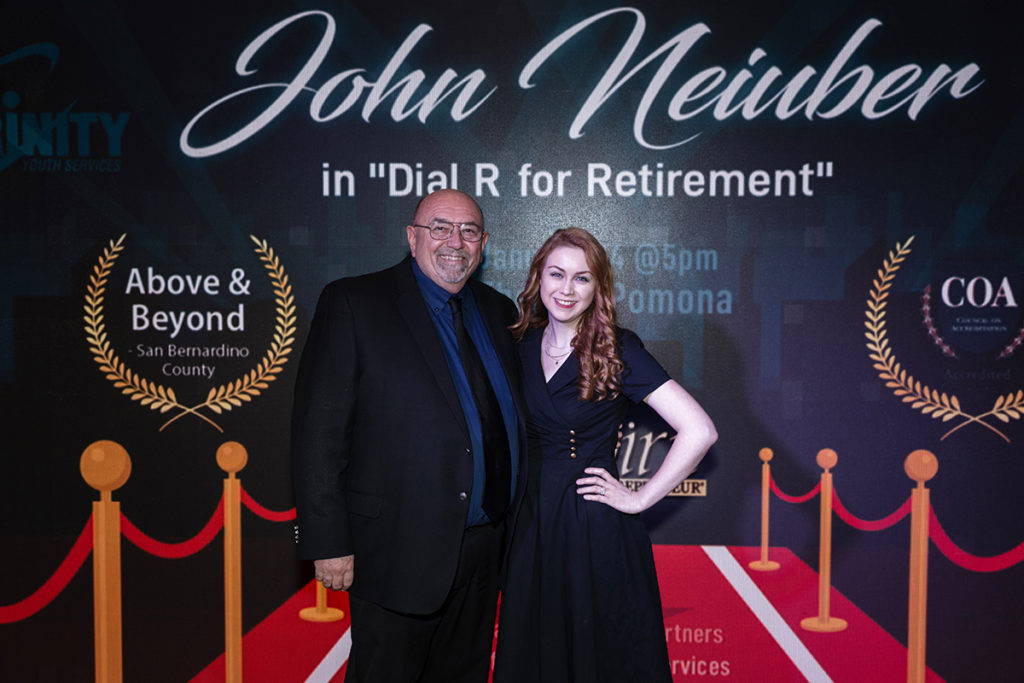 Staff gave speeches honoring John’s many years of exemplary leadership. Director of Development, Jenelle Phillips thanked John for his contributions to the Children’s Foundation of America and presented a trophy. She shared about John’s unique ability to identify the things that make you who you are and use those things to fill a need. Director of Quality Assurance and Compliance, Fr. John Alexandres, spoke about John’s leadership in completely turning the agency around when we become CEO in 2005, from an agency on the verge of bankruptcy to a successful, cutting edge and thriving organization. 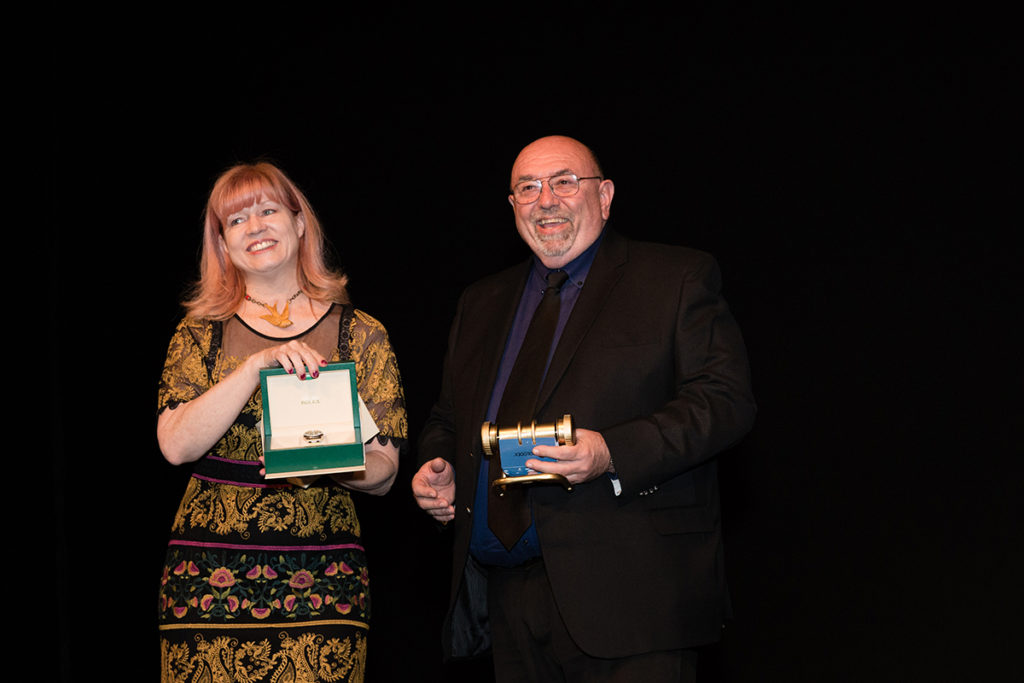 Current CEO, Cher Ofstedahl, kept her words brief as to not cry, having worked with John for over 20 years at Trinity Youth Serves. In order to keep things light, she shared a few jokes and presented John with a special gift from staff. 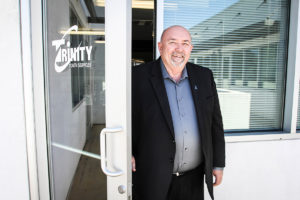 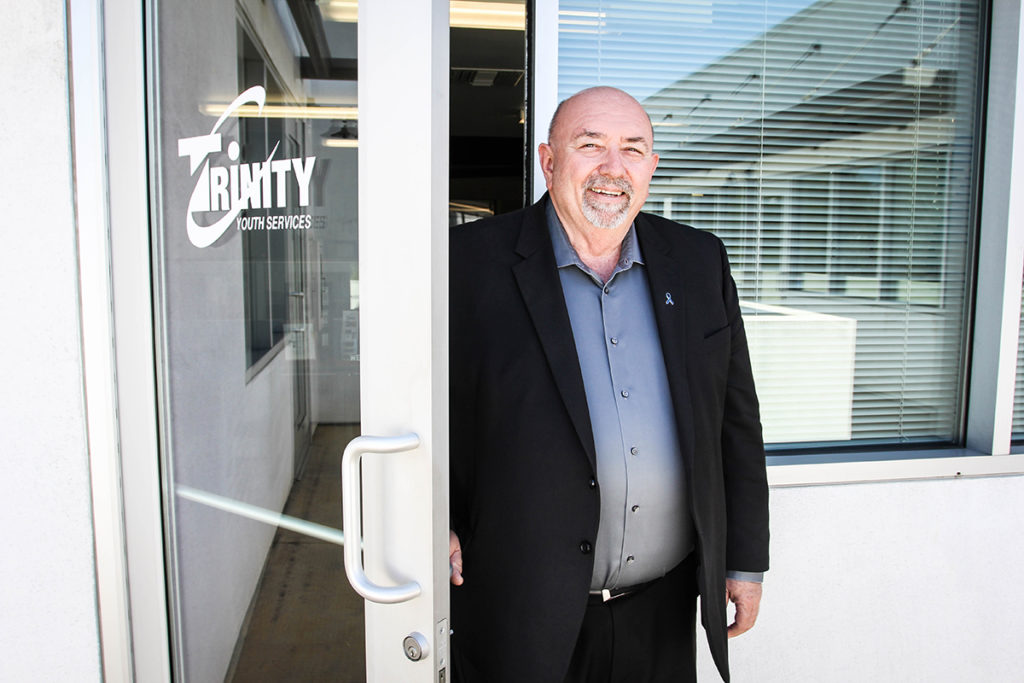 Mention the name John Neiuber and you’ll hear powerful words such as, “influential,” “wise,” and “mentor,” Neiuber has made significant, life-changing contribution’s through his leadership at Trinity Youth Services (TYS). During his successful tenure of 28 years at TYS, Neiuber excelled in supporting thousands of children in crisis find permanency, implemented essential residential therapy and mental health programs for trauma-affected youth, and created a positive work culture that values integrity and living by example.

Neiuber, one of the founders of the Children’s Foundation of America, which exists to provide resources to support foster care, adoption, residential treatment, mental health and community-based programs, is the epitome of what a life of service is all about: Helping youth transform their lives and create better futures. According to Neiuber, “True and abiding happiness in work comes from being deeply engaged in solving problems with talented people you know are also deeply engaged in solving them, and from knowing that the children or youth are responding to the services you all have worked so hard to deliver.”

A highly influential member of the community and champion for children and families, Neiuber has an impressive list of achievements. Prior to joining Trinity Youth Services, Neiuber was a veteran of the United States Armed Forces and received the Army Commendation Medal. He later graduated from Cal State University, San Bernardino with a B.A. in English. After obtaining his degree, he taught composition and literature while earning an M.A. in Educational Administration. After earning his M.A., Neiuber accepted a position as an elementary school principal and was later inducted as president for Advanced Education Services (AES). He was also president of the National Association of Private Special Education Centers, where he was honored as the Executive of the Year.

During his time as president, Neiuber established fourteen schools in four states, an impressive achievement that led him to becoming the COO of TYS, in 2002, and CEO in 2005. Under Neiuber’s leadership and guidance, Trinity, once on the verge of bankruptcy, blossomed into one of the most revered and longest-standing foster care and adoption agencies in the country. Due to his unparalleled success, Neiuber won the Social Entrepreneur Award for the Inland Empire’s Spirit of the Entrepreneur awards in 2016. In June 2019, due to Neiuber’s commitment to excellence, Trinity was granted re-accreditation and received one of the highest scores in the Counsel On Accreditation’s history.

Neiuber’s remarkable legacy has sparked a momentum that will continue to propel the agency and families served forward for decades to come. Although Neiuber is stepping down as CEO, he continues to be a highly sought-after community leader who writes a monthly history column for Claremont Courier. Neiuber is also an architectural commissioner for the City of Claremont, is a celebrated artist with exhibits at the Claremont Art Walk, and will continue as president of the board of both Trinity and the Foundation. His expertise, wisdom and commitment to community will always be the basis Trinity Youth Services and the Children’s Foundation of America proudly stand on in 2020 and beyond. 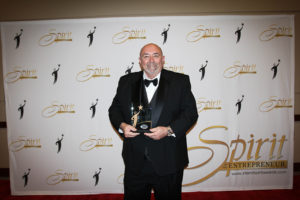 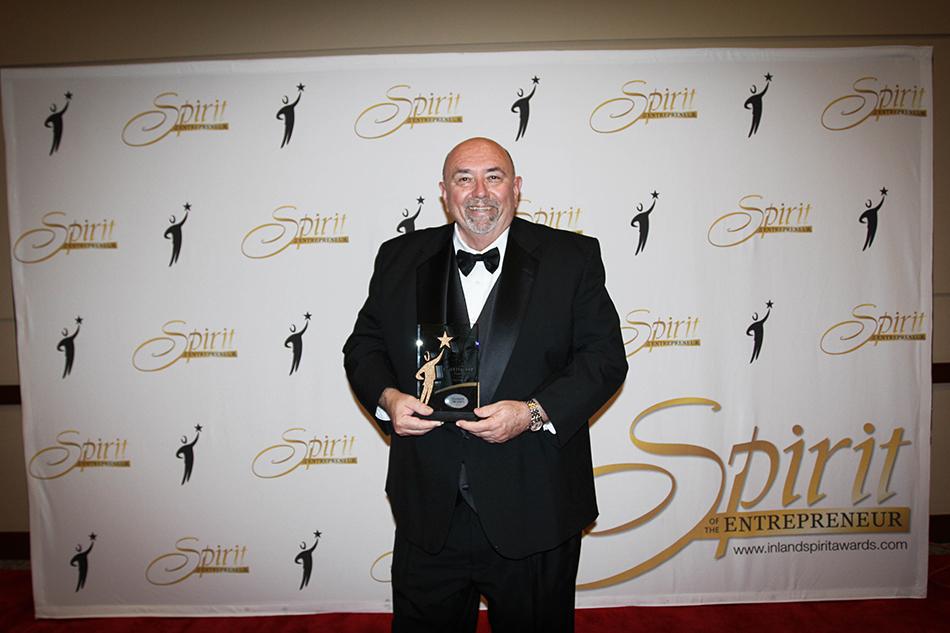 Riverside, Calif., November 15, 2016 – Amid an evening networking, a surprise visit from Walt Disney’s granddaughter and entertainment from Ekenah Claudin and his Story Box projection mapped live performance, an audience of 860 business and community leaders attended the Spirit of the Entrepreneur Awards at the Riverside Convention Center to celebrate and honor Inland Empire entrepreneurs. The annual black-tie gala event recognizes the leadership, innovation and business acumen of Inland Empire entrepreneurs. 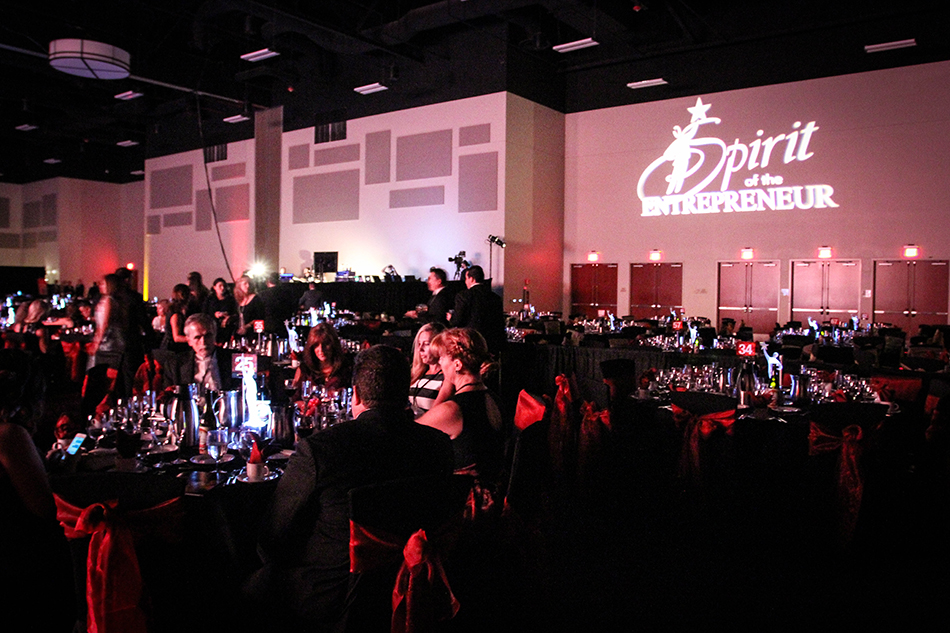 This year’s award recipients recognized at the black-tie gala, chosen from 28 finalists, include:

Best of the Best Award (top entrepreneur of the event) 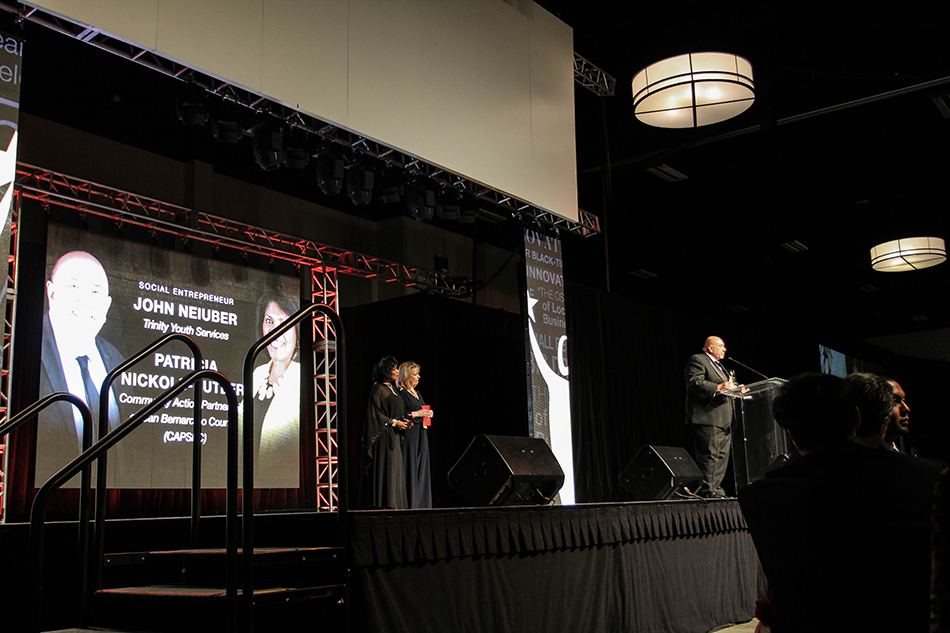 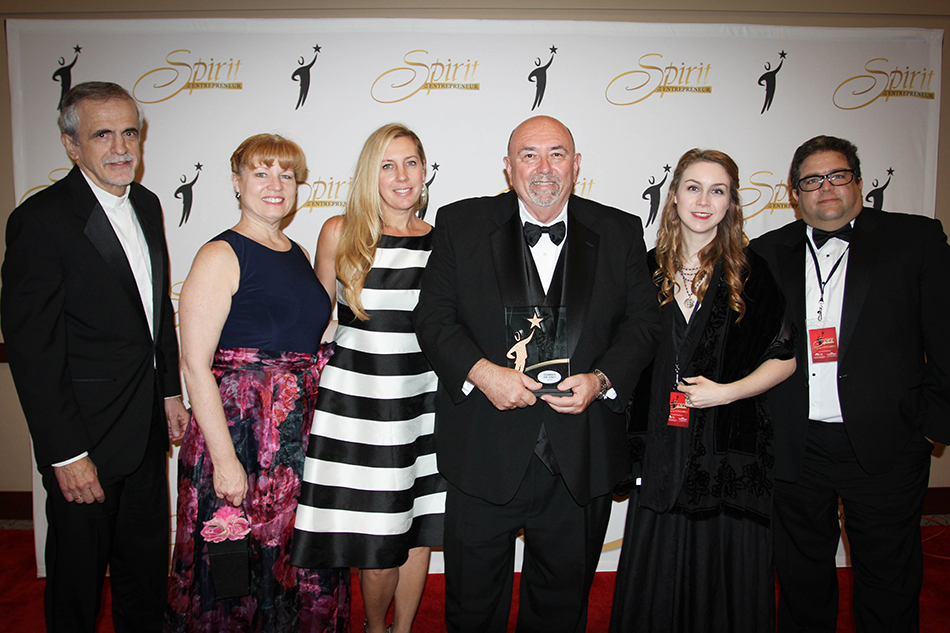 As part of the event festivities, the Garner Holt Student Fast Pitch Competition was held for five future entrepreneurs to deliver a 90-second pitch about their up-and-coming venture idea to the audience and were critiqued on their overall preparation, poise and professional presentation. The top three pitches were recognized and the top student walked away with a $4,000 prize. The fast pitch, which involves students from Cal State San Bernardino, is sponsored by local entrepreneur Garner Holt of San Bernardino. Holt’s company, Garner Holt Productions, is the world’s leading manufacturer of Animatronics & Animatronic Figures. The top 3 finishers were: 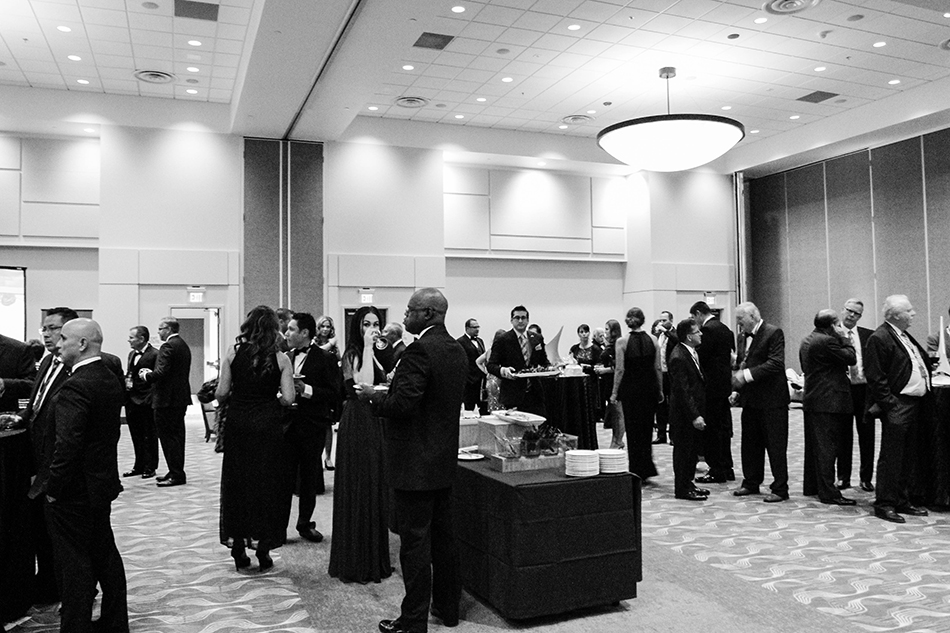